It was not that long ago that one of the greatest adventures in space revealed the complex and surprising nature of our outer solar system culminating in August of 1989 when Voyager 2 sped past Neptune capturing our first close-up look at that amazing blue planet. But it was perhaps the images of its moon Triton that was most amazing at the end of that small spacecraft’s journey past the large gas giant planets and their moons.

There in the cold outer solar system, far from the heat of the sun was a small world that was complex, colorful and geologically active where most had expected to find frozen balls pockmarked with craters from eons of impacts with space debris. Instead there were active nitrogen geysers.

Twenty five years later, the New Horizons spacecraft crossed the orbit of Neptune on its way to the first flyby encounter with Pluto which took place after 10 years of travel in July of 2015. The best image taken of Pluto prior to that flyby was a small blurry suggestion of a handful of pixels from a Hubble Space Telescope image.

As New Horizons started to send back first images upon a still distant approach, the first images suggested a colorful and contrasted world of dark black and ochre regions. The artist renditions provided were tantalizing but not yet real and authenticated … what would it really look like?

Then a large heart shaped area began to emerge and the initial thought of ochre became more reddish. An atmosphere of some kind was expected but would that really be true and was it also geologically active like Triton? Is that possible so far from the sun? It does and it is!

NASA released a piece of software called “NASA’s Eyes” that allowed you to interact with the trajectory of the New Horizons craft as it followed the planned flyby of Pluto and its increasing count of newly discovered moons. You could even watch the pre-programmed plan for the spacecraft’s science experiments and image surveys. It was an ambitious set of commands and due to the speed of the flyby there was no time to transmit data during closest encounter. Everything needed to be recorded and sent back afterwards … a very risky pins and needles proposition!

The close approach was not without serious drama as the onboard computer went into safe mode sending the mission team into problem solving mode a few weeks before the narrow flyby window. New instructions were uploaded and things were resolved to result in a perfect mission and incredible data and imagery sent back for months. Much of this is still being evaluated and new revelations continue to be released.

It is impossible to place a value on knowledge. When acquiring knowledge is associated with such amazing excitement and wonder it is well worth what has proven to be a most modest investment. Apparently it costs the federal government twice as much anually to mint new pennies and nickels than it did to fund the New Horizons mission over its fifteen year lifespan to date.

The spacecraft has been so impressive that its mission has been extended to fly by a small Kuiper Belt object. To anyone that objects to these science exploration missions, you might want to consider how much we get simply from the skills derived from navigating to these remote objects. That alone is simply amazing. 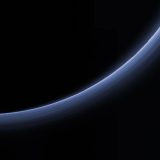